How GST Bill in India has transformed the nation’s tax system?

The introduction of the much ambitious GST Bill in India came as a respite to its citizens as it is expected to curb corruption and introduce transparency in the tax system. This latest indirect GST tax has subsumed all the other existing indirect taxes, thereby reducing the cascading effects of tax duties that were responsible for market inflation. Pitched as ‘One nation, one tax’,GST intends at benefiting everybody in the country and affective none adversely. However, it will take some time before anything could be said about the implementation of this tax; whether GST is a miracle or a mirage. Here is more on this most sought after regime.

The need for GST bill.

Prior to the implementation of Goods and Services Tax or GST Bill in India, taxpayers had to pay multiple taxes on goods and services. The complex and confusing tax system used to give way to corruption, hence leading to problems for the government.Among the several included taxes that the traders, manufacturers, and at times commoners, etc. were bound to pay before GST included:

What is GST Bill?

As you already know, a bill is a draft of proposed law that is escalated to the Parliament for healthy discussion followed by its approval. Once passed, the bill becomes an act and is implemented throughout the country and the same holds for GST Bill in India as well. After years of speculations and marathon discussions, both the houses of the parliament finally passed four legislations on 6th April 2017 – The Central GST Bill, 2017; The Integrated GST Bill, 2017; The GST (Compensation to States) Bill, 2017; and The Union Territory GST Bill, 2017. This led to the implementation of the much talked about Goods and Services Tax (GST) from July 1, 2017. The GST bill is hence now transformed to the GST ACT and is being followed under full constitutional rights all over the country. 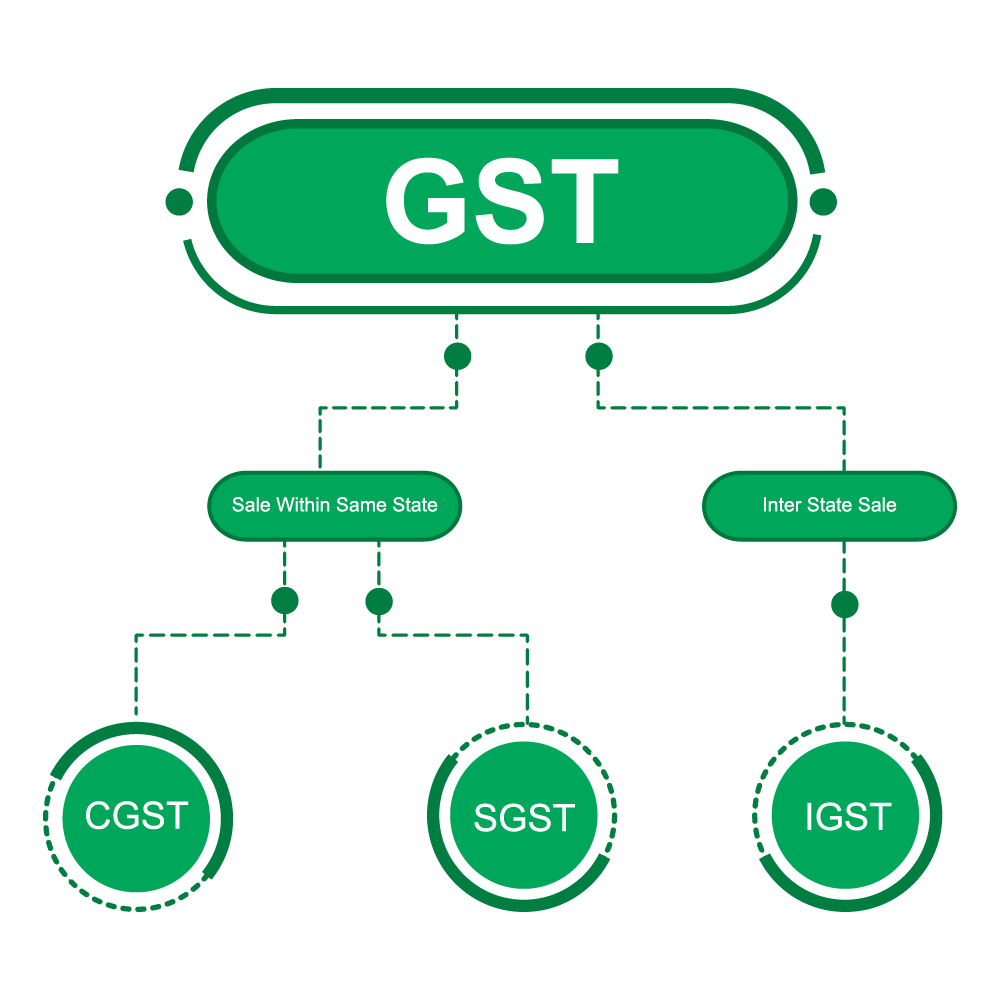 Various forms of GST have been introduced under the latest GST act. These include:

To understand all these GST taxes, namely, CGST, SGST and IGST and identify the conditions that make them applicable, it is important to know whether the transaction is an intra-state or inter-state supply.

This occurs when the location of the supplier and the buyer is in the same state. In this type of transaction, the seller is required to collect from the buyer, both Central GST and State GST. As is obvious, while CGST gets collected with Central Government, the State Government acquires the SGST. 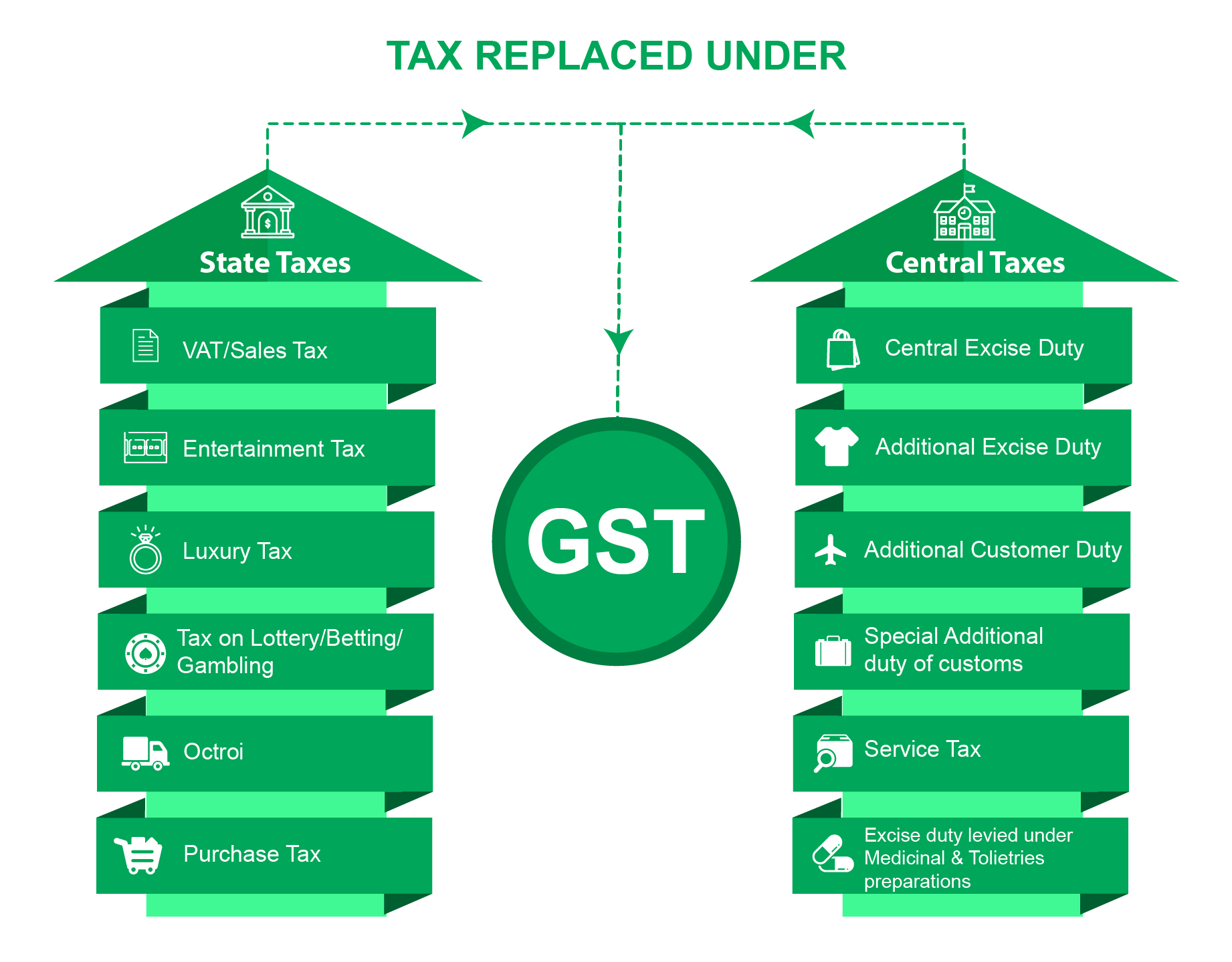 When the location of the supplier and the place of supply (or buyer) are both in different states, an inter-state supply of goods and/or services takes place. IGST is also levied in the instances of import or export of goods or services or when goods or services are supplied to or by a SEZ unit.In all such types ofGST transactions, the seller collects IGST from the buyer.

The image below gives a pictorial representation of the working of Dual GST Model within a state. Note how State GST and Central GST are being applied. 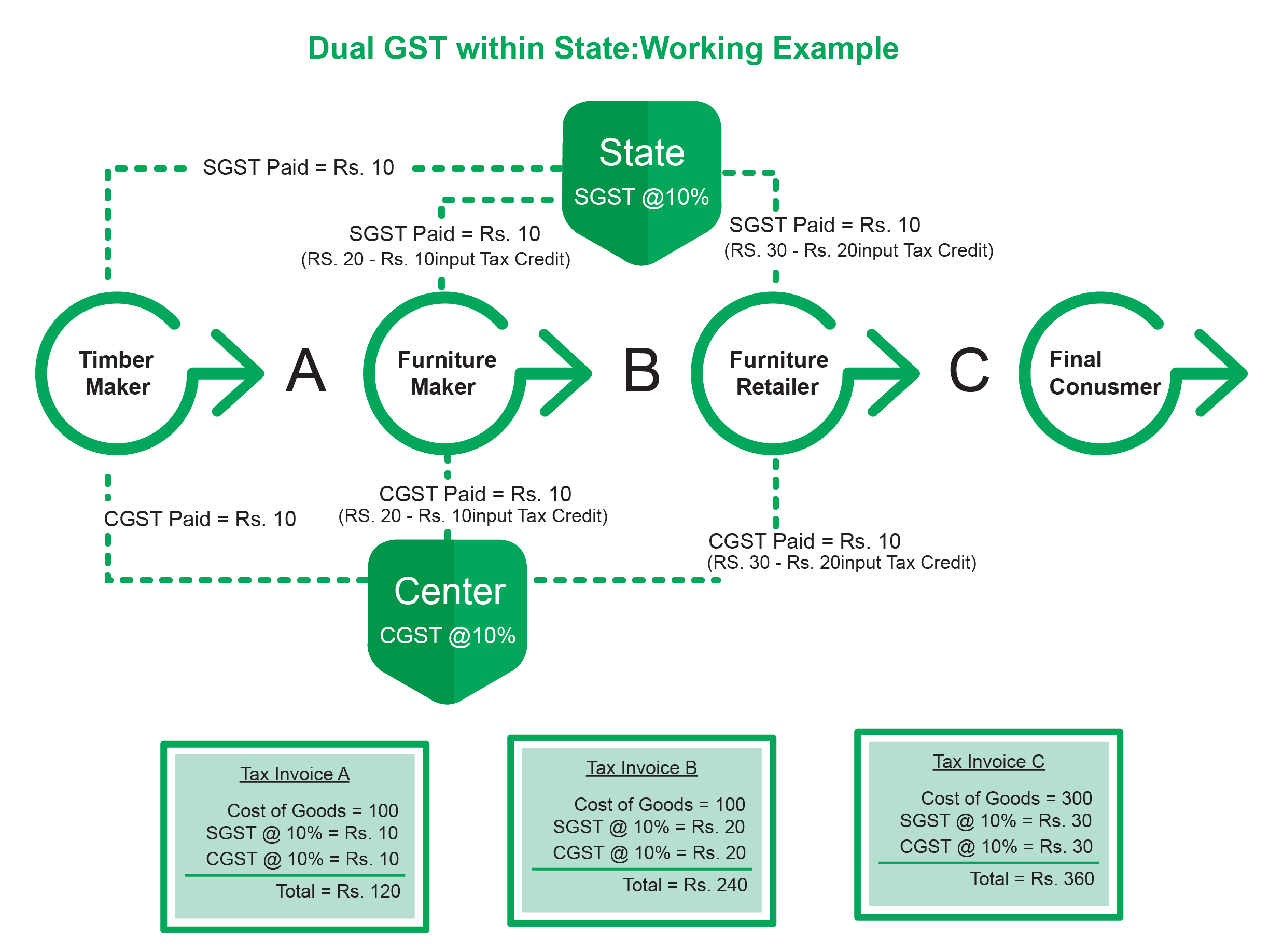 The image below depicts a pictorial representation of the IGST model for transactions between states. Observe the role of the three GST taxes -IGST, SGST and CGST. 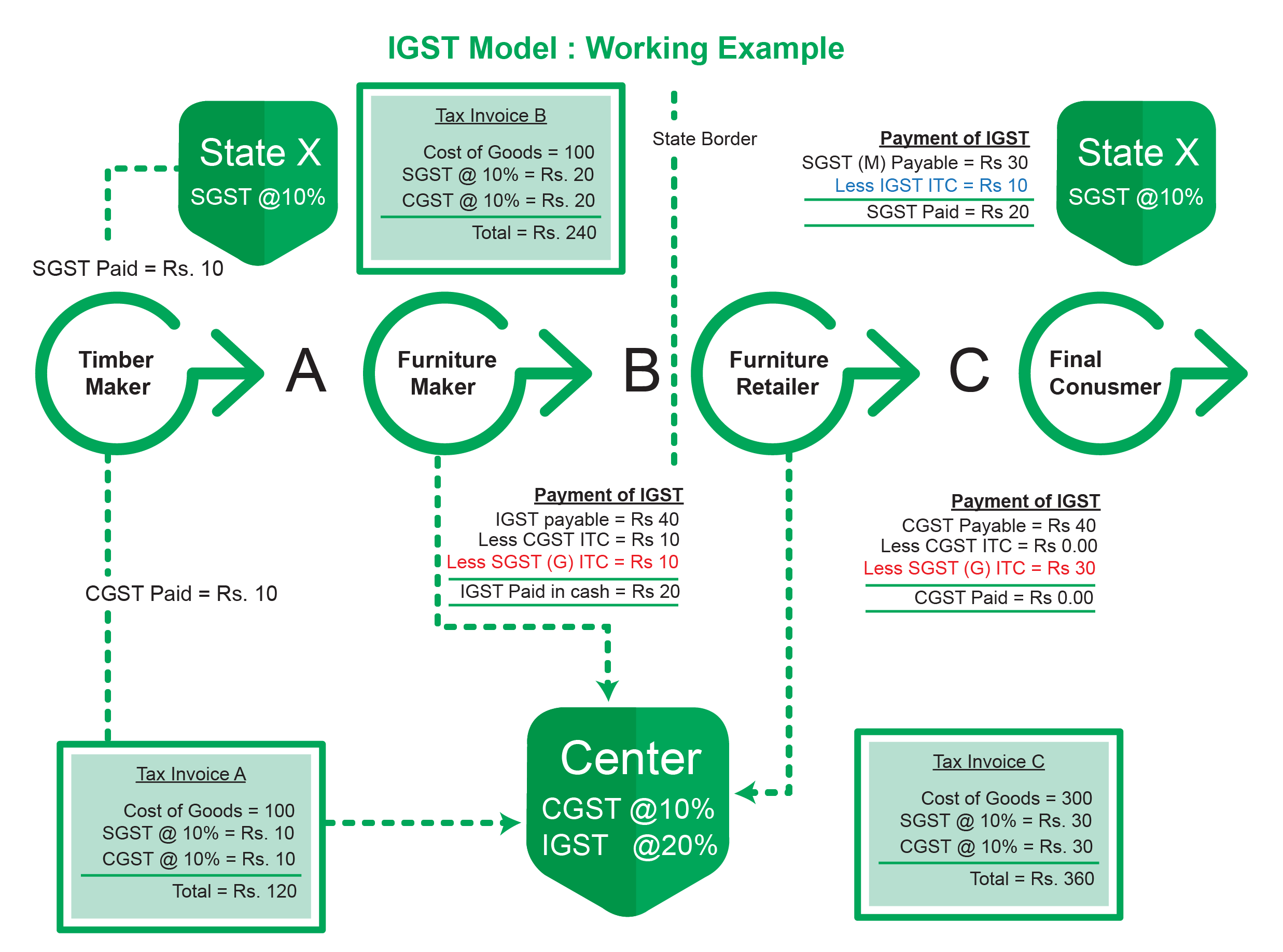 Since long, the speculations were ripe about the tax slabs to be introduced under GST. There were uncertainties regarding the number of taxes levied, whether it will be a single one or multiple, depending on the goods and services offered. With the implementation of the GST Bill, all such confusions have now been answered. To be precise, the government of India has kept 1211 items under different tax slabs depending on their respective categories. Here is a brief description of which item/service, etc. goes to which slab under GST. 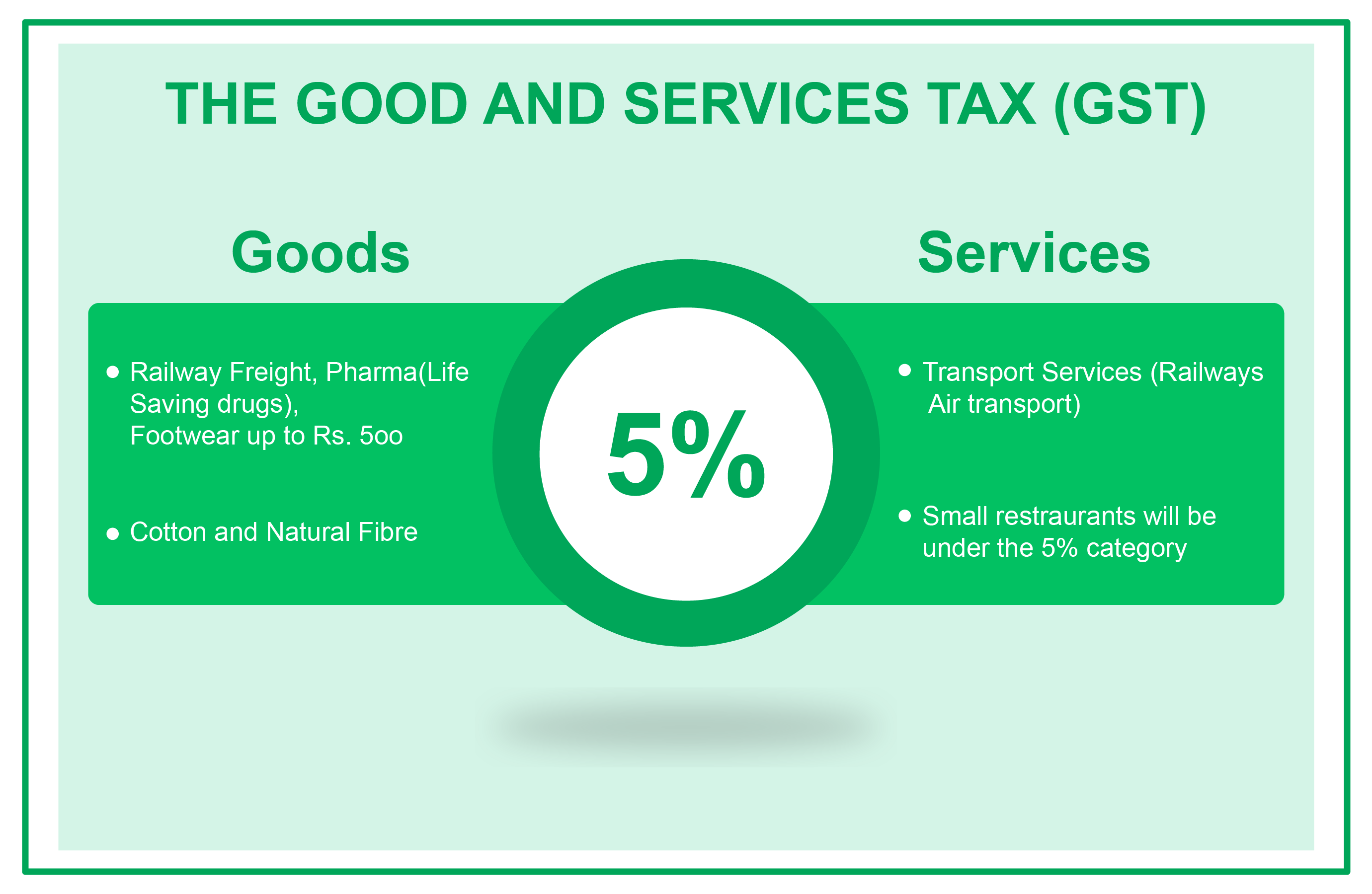 Besides, other items that have been accommodated under 5% GST tax slab include packaged food items, frozen vegetables, medicines, apparel below Rs 1000, footwear below Rs 500, Postage or revenue stamps, Branded food, fibre products like mats, pouches, wallets, skimmed milk powder, dried tamarind, walnuts, cashew nuts, Rosaries and prayer beads, Cotton quilts under Rs 1000 per piece, corals, and so on. As for services covered under the 5% GST tax bracket include railways and air transport, small restaurants and textile job work. For the very first time, the textile industry has been made to pay 5% GST tax across the manufacturing chain. Till now, this industry was completely tax free. 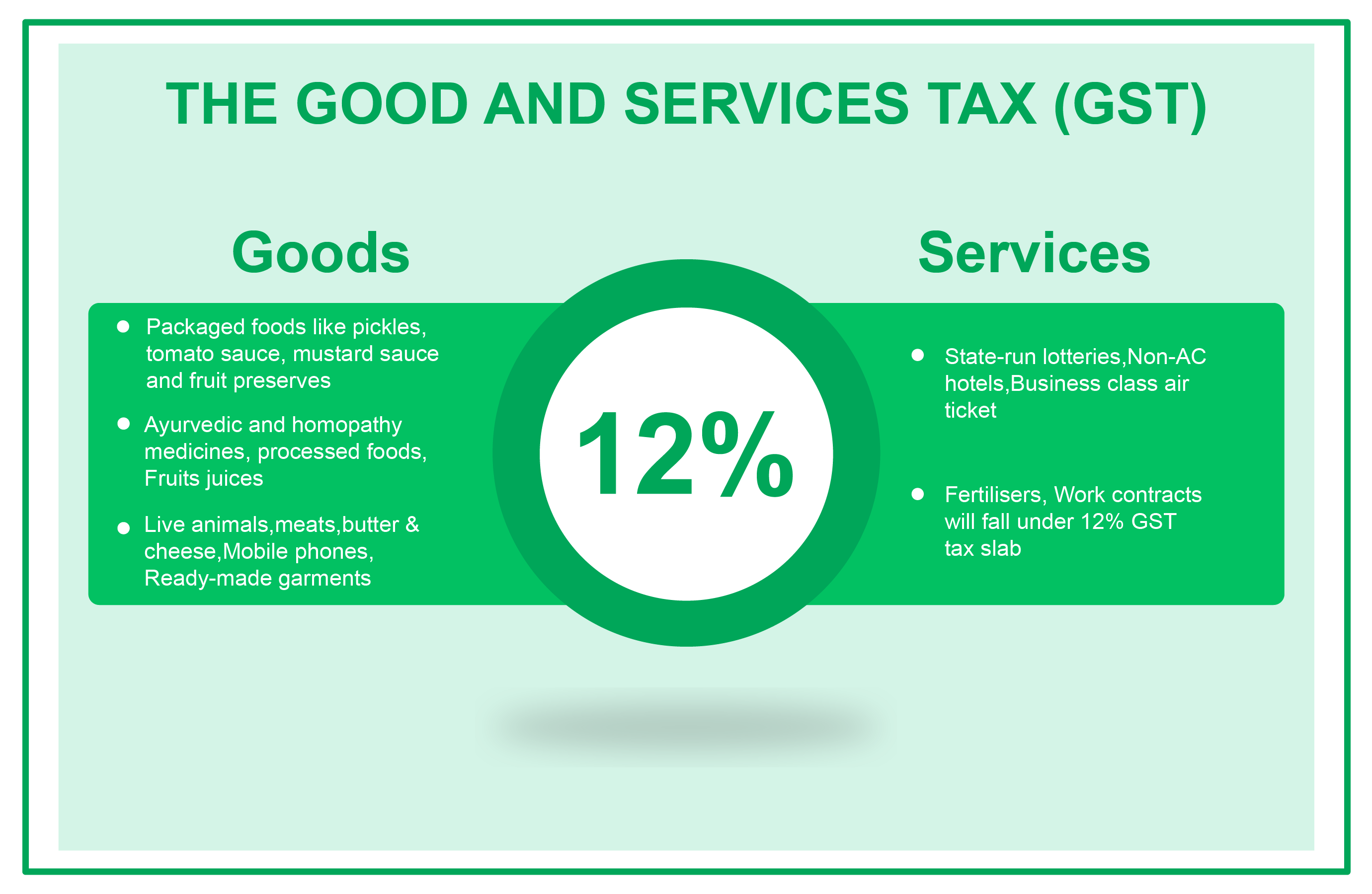 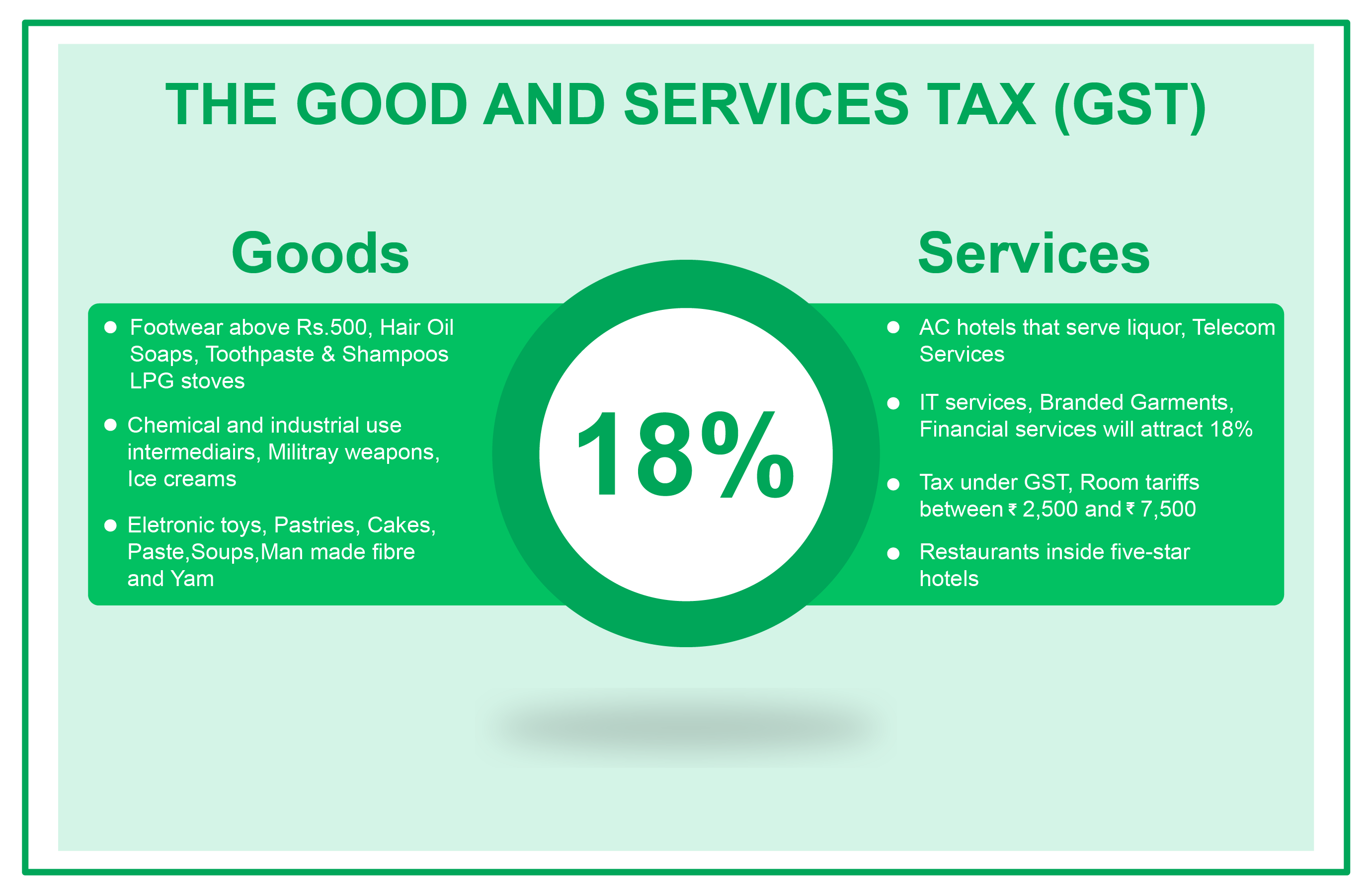 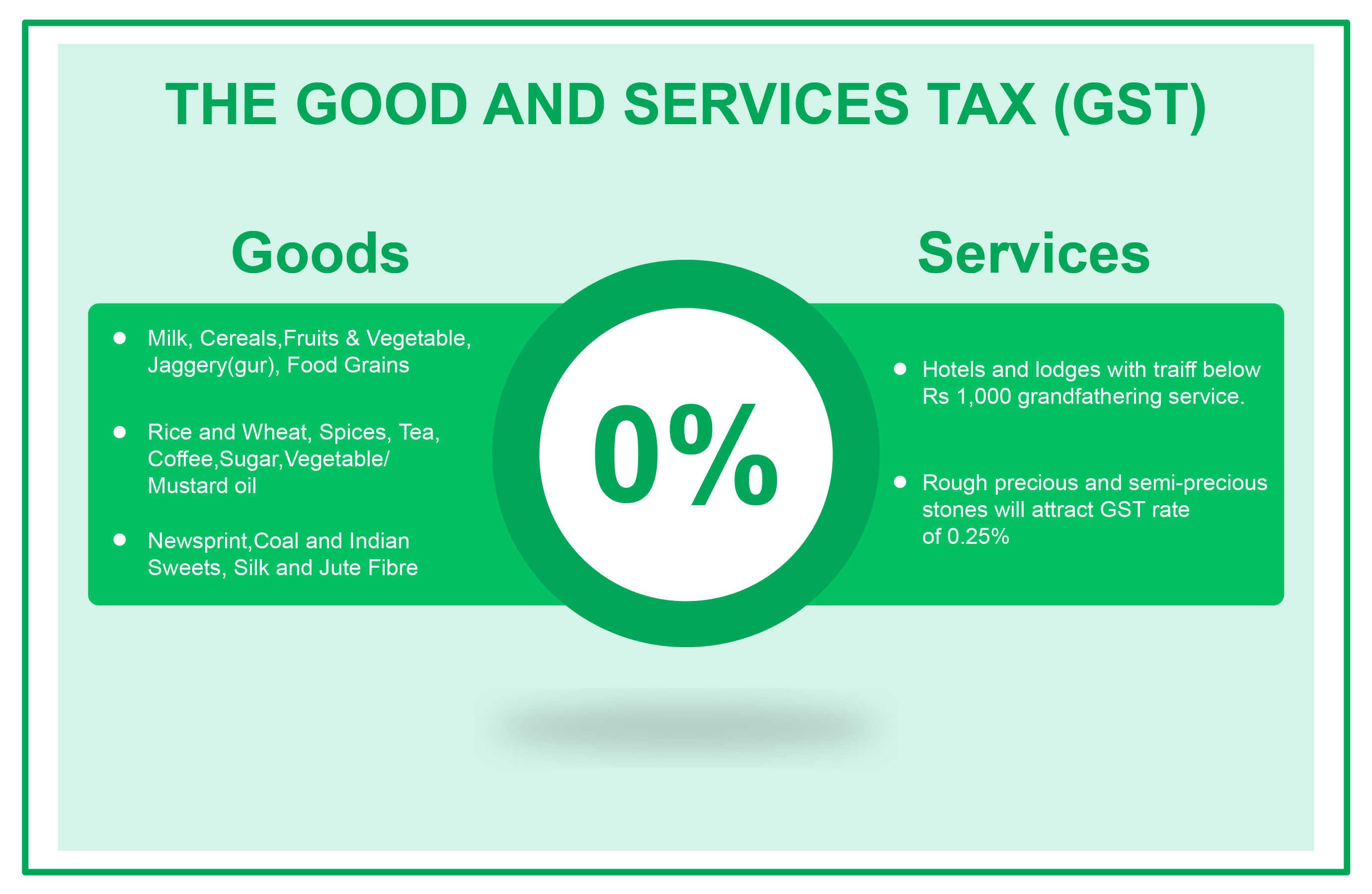 Several items have still been exempted from the GST tax slabs and we hope they remain excluded. These items include eatables like fish, chicken,eggs butter, milk, curd, natural honey, fruits & vegetables, Prasad, sindoor, bangles, kajal, stamps, judicial papers, printed books newspapers,bones and horn cores, drawing and colouring books for children, khadi bought from village and Khadi industries stores, charkha, brooms, clay idols,human hair, and so on. As for services, lodges and hotels having tariff below Rs 1,000 and grandfathering services have been kept at 0% GST tax slab.

In addition, unsorted rough industrial diamonds have been charged 0.25% GST tax instead of 3%.

You can get the complete list of all the items included under different GST tax slabs on the official website of Central Board of Excise and Customs.Here is the link for the same.

This is just a brief description of Goods and Services Tax or GST from GInvoicing.com. If you are interested to get a detailed insight into the murkier details of this newly introduced GST tax then feel free to approach us any time. We are equally helping in enabling you provide services related to GST bill creation and everything related to it.