After years of speculations, the Goods and Services Tax or the GST bill is now finally under action. After getting approval by Rajya Sabha, the GST bill became an Act and was implemented for general public all over India from July 2017. Touted to be a reform in the Indian tax system, GST replaces all the indirect taxes being imposed on the goods and services by the state and central government of India. In the run, it makes way for a number of benefits for the tax payers. However, besides numerous advantages, the GST bill does accompany certain disadvantages as well. Moving on with this discussion, here is a brief discussion on the pros and cons of the implementation of GST. 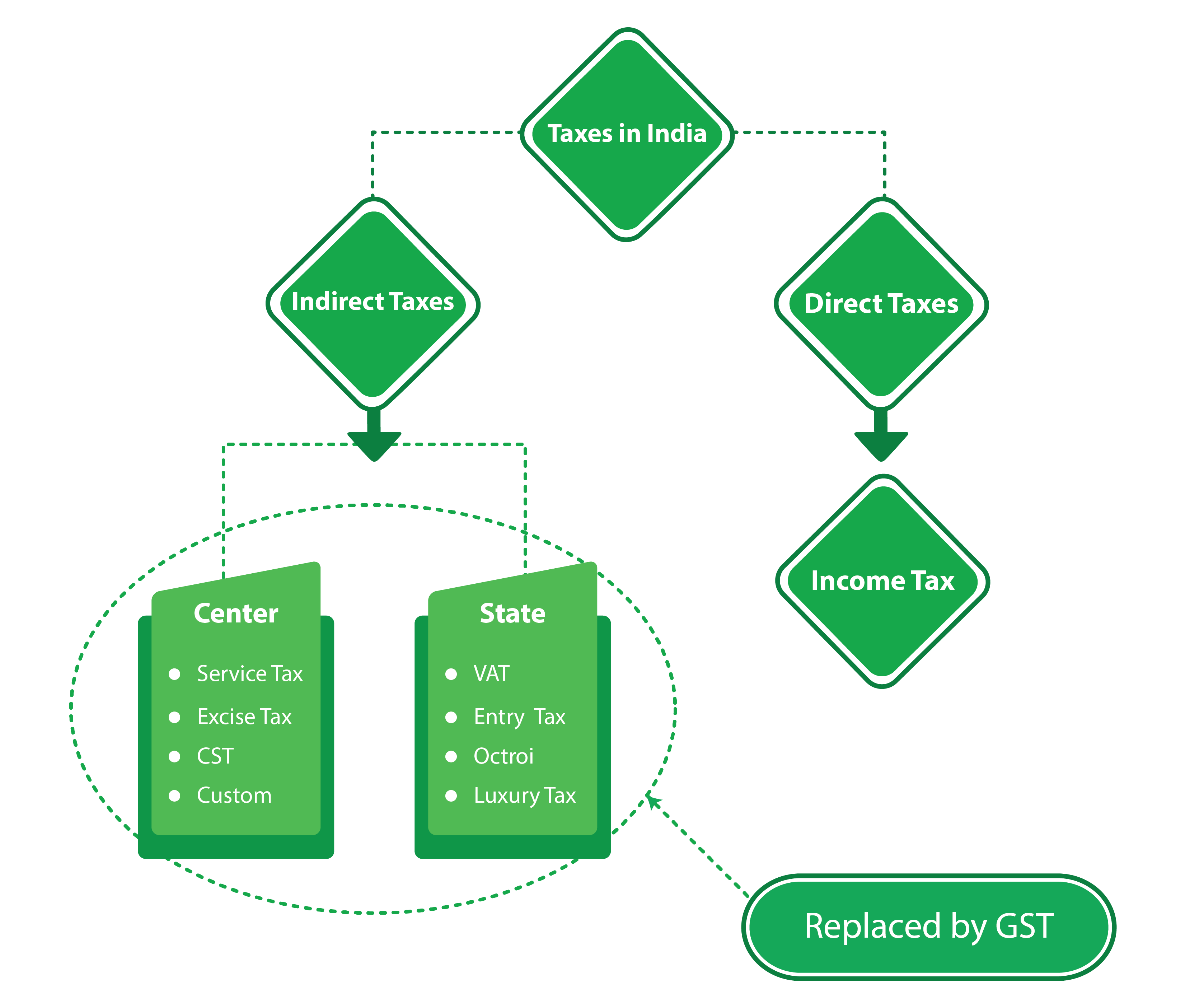 Benefits of GST in India

The game changer GST bill abolishes many indirect taxes, hence enabling the people to pay only a single GST tax. It could lead to reduced prices for goods and services and make them competitive in the international market. Even economists expect an increase of GDP by 2% in the long run with the implementation of GST. Here are multiple plus points of this newly introduced GST tax that shall benefit the stakeholders in India in the long run.

1. GST gets away with the cascading effect

The best way to describe the cascading tax effect is to talk about ‘Tax on Tax’. The example here could illustrate the concept the better way.

In the current scenario, under similar circumstances:

Hence, you see that the VAT has been subsumed in the GST tax, thereby giving the benefit to the service provider. This eliminates the cascading effect.

Small scale businesses and startups whose annual turnover exceeded Rs 5 lakh had to pay Value Added Tax before GST came into effect. Likewise, for service tax, businesses with turnover under Rs 10 lakhs were exempted. The newly introduced GST has eased off this limit appreciably; as the businesses are required to pay the tax only of their annual turnover goes beyond Rs 20 lakh. This has come as the much desired breather for small traders as wells the beginners in their respective industries.

For small and medium enterprises as well as start-ups the introduction of GST has benefited exceptionally. While those having turnover under Rs 20 lakhs are exempted, small businesses with a turnover between Rs 20 lakh to Rs 75 lakh have to pay only nominal tax under GST composition scheme. The below includes the GST rates for a tax payer applying under composition scheme:

Besides minimum tax rates, composition scheme disclosed under GST also emancipates the taxpayers from filing multiple returns. Under the normal circumstances, a GST taxpayer has to file at least 3 monthly returns and one annual return, amount to at least 37 returns in a financial year. Failing this could tend the taxpayer to face penalty. For small scale suppliers and manufacturers maintaining detailed books of accounts and recording transactions with supporting documents on daily basis is quite a cumbersome task. The Composition Scheme hence helps them simplify this process by uploading only quarterly return under GSTR-4. The requisite dates are as below:

With GST becoming popular with time, it will give a significant boost to the ongoing ‘Make in India’ initiative being endorsed by the Government of India. It will enhance the value of goods and services produced in India, hence making them competitive in both the national and international market. Moreover, the IGST or the integrated GST, which is equivalent to the State GST + Central GST will be levied on the imported goods, hence ensuring equality with the tax regime on local goods and services.

Supplying goods through ecommerce portals accompanies varied VAT laws prior to GST. For instance, website like Amazon, Snapdeal, Flipkart, etc. supplying goods to a particular state, was required to file a VAT declaration before GST. This was followed by mentioning the delivery truck’s registration number. At times, in the absence of documents, the tax authorities would seize the consignment in the pre GST era. However, several states like West Bengal, Rajasthan and Kerala did not require such ecommerce portals to register for VAT. Hence, the supply of goods in the ecommerce sector used to be a mixed bag of complicated laws and compliances and was perhaps quite confusing for the concerned companies to follow. The GST regime removes all these adverse treatments and compliances. GST clearly maps out the provisions applicable to the ecommerce industry all over India, hence eliminating any complication concerning the inter-state movement of goods.

Same as in the case of ecommerce sector, the logistics industry was also required to keep track of different warehouses located across multiple states. This was to get away with CST and the state entry taxes on the inter-state movement. Compelled to work much below their capacity, this industry was going under losses due to heavy operating costs before GST. However, with the introduction GST bill, such limitations on the inter-state movement of goods have been now minimized leading to enhanced gains. Consequently, post GST, the warehouse operators are more interested to have their warehouses at strategic locations instead of every possible city that comes in their delivery route. The same holds for ecommerce aggregators as well.

7. Unorganized sector getting regulated under GST

Several industries like textile, construction and more were unorganized and unregulated in the pre GST era. Thankfully, the GST system provides scope for online payments and compliances. It also enables the provisions for availing input credit only after the supplier accepts the amount. All this has made way for regulation and accountability to the so far unregulated industries.

Beyond doubts, GST has come as a silver lining on the unorganized tax system that prevailed prior to its implementation. GST does offer a slew of advantages, however, several of the side effects of GST bill could not be sidelined either. Here are few of these GST demerits:

In order to update the existing accounting software to make it GST compliant or to buy new GST software, the businesses are compelled to pay heavy costs. Moreover, they have also to manage the expenses of training their staff on proper utilization of the new GST software. Alternatively, they can approach tax professionals such as CAs, but that also accompanies considerable monthly fee. Hence, something needs to be done to cut down these additional expenditures. Perhaps, the GST ready software by GInvoicing could well be a suitable alternate to this problem.

The fact that all the GST returns and compliances need to be filed online could trouble a significant section of taxpayers who relied on the pen and paper invoicing till date. Indeed, it is the digital age, but many of us are yet to own a computer and learn to operate. They can however seek the help of tax professionals, but it could cost them drearier. Yet again, the GInvoicing software could make things quite similar in this regard. Businesses owners can approach some tech savvy person to upload their GST invoices through this software. The tool will take care of the rest of the GST proceedings.

GST may impose tax burden on Small to medium enterprises

Start-ups and small business are expected to gain appreciably with GST as they will be exempted to pay taxes till an annual threshold turnover of Rs 20 lakh. However, SMEs whose turnover was more than 1.5 crore used to pay excise duty earlier. They will now have to pay GST as soon as their turnover crosses the Rs 20 lakh more. Probably, the composition scheme could help them to some extent.

To summarize, Goods and Services Tax or GST has emerged has a result of much awaited demand for change in the tax system of India. The newly introduced GST bill is expected to introduce multifarious benefits for traders, manufacturers in the long run. However, taxpayers are a bit confused regarding the whereabouts of GST as of now, possibly due to the unpreparedness reflected in GST implementation. Probably, it would have been better to do some thorough homework on the reason behind the successful economies post GST implementation in other nations. However, we believe that it is just a matter of time, after which things will get back to track and GST will pay off rich dividends for the national economy in the long run.